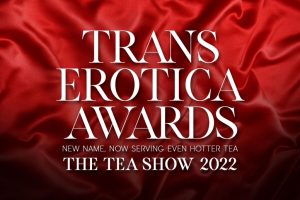 The Transgender Erotica Awards (TEAs) have announced that they are re-branding to the Trans Erotica Awards, and will still be known as the TEAs for short. The upcoming TEAs have not formally announced their 2022 dates yet, citing they want to see how in-person events are handled in Los Angeles to protect the safety of guests and staff.

“We think of the TEAs as a living, breathing entity in many ways. It’s one that has evolved multiple times throughout its history and we believe it’s time for it to do so again. Shifting our language in this way feels more inclusive to the community we’re celebrating.” – Kristel Penn, TEAs Executive Producer