Skyy Knox is Coming to Cam4 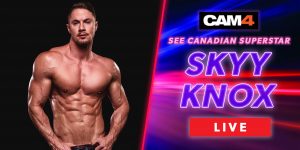 “Our partnership with Skyy Knox is something we’re absolutely thrilled about. We want to elevate Skky’s webcam network and help him curate an incredible fanbase from around the world. CAM4 is deeply focused on helping performers get discovered, grow their brand, and get in front of engaged and excited audiences worldwide!” – Shannon McD, CAM4 Communication Manager

Interested in becoming a CAM4 webcam model? You can either signup here or learn more about the camming site by checking out the link below. CAM4 is a popular camming site with tons of great features. Although camming is the main focus, models can also make money from selling clips and running fanclubs. All genders and sexual orientations welcome and anyone 18+ can make money as a CAM4 webcam model.