BongaCams Extends 80% Payout for the Rest of the Year 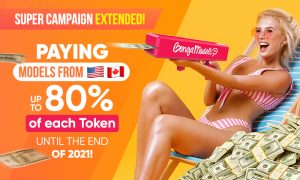 Fast-growing token cam site BongaCams has announced that they are extending their higher payout rate for Canadian and American models until the end of 2021. The original promotion – which increased token payouts from 60% to “up to” 80% – was also open to Australian and Latin American models, but those groups appear to have been left out of the extension. The increased payout rate was originally due to expire on July 31 but will now run until December 31, 2021 for Canadian and American performers.

Interested in becoming a BongaCams webcam model? You can either signup here or learn more about the network by checking out the link below. BongaCams is a popular camming site with tons of great features. All genders and sexual orientations are welcome, and anyone 18+ can make money performing on the site. in addition to camming, also make money from selling videos directly from the model profile page.